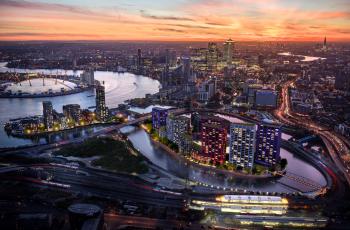 Twelve months on from the very successful #WinAHouseInDublin competition, Roscommon GAA and Club Rossie are running another ambitious competition to fund the re-development of Dr. Hyde Park and the development of the Dermot Earley Centre of Excellence.

#WinAHomeInLondon is the latest fundraising initiative from Club Rossie and offers one lucky winner the chance to become the owner of a two-bedroom apartment worth €815,000 (£695,000) in one of London’s most culturally rich new neighbourhoods, London City Island.

Dubbed a ‘mini-Manhattan,’ London City Island is situated a stone’s throw from Canary Wharf and is home to some of the UK’s most important cultural institutions, including English National Ballet, London Film School and several leading art galleries. Widely recognised as an emerging new cultural hub for London, the award-winning development also comprises 1,706 new homes, restaurants, cafes, and when complete, office space and a rooftop games pitch.

Tickets are priced at €100 and are available online NOW at www.winahomeinlondon.com. This competition will take place on Sunday, 10 May 2020, a week after Roscommon are due to travel to London for their first game of the 2020 GAA Football Championship.

Roscommon is the hometown of Sean Mulryan, Group Chief Executive of Ballymore, the developers of London City Island, who has long been a supporter of Roscommon GAA. Commenting on the competition, he said; “I am very pleased to be able to support the competition which will raise vital money for the redevelopment of Dr. Hyde Park and the development of the Dermot Earley Centre of Excellence in Roscommon. I wish all of the participants the best of luck.”

Pat Compton, Chairman of Club Rossie, commented; “Last year’s #WinAHouseInDublin competition made an incredible impact on Roscommon GAA. The support we received from Ballymore, the interest generated and the success that it was both locally and internationally just exceeded our wildest imaginations,”

“The competition grossed €1.4 million and netted €943,000 once all expenses, including marketing and the purchase of the house, were covered so it really was phenomenal. It put Roscommon GAA finances in a strong position going forward to proceed with our two main projects of the redevelopment of Dr Hyde Park and the proposed Dermot Earley Centre of Excellence,” he concluded.

Aidan Brady, the newly appointed Commercial Director of Roscommon GAA, said; “Due to the success of the last competition and together with the amazing support of Sean Mulryan and Ballymore, we decided to run another house competition with a twist to ensure that future generations of Roscommon GAA will be debt free and have a sporting grounds and centre of excellence that they can be proud of.”

Seamus Sweeney, the Chairman of Roscommon GAA, said; “The GAA is a vital part of the community in County Roscommon. It’s what we all have in common and is an integral part of our past and everyday lives. To be able to give all our teams the best opportunities to compete going forward requires huge financial backing. The recent efforts of our volunteers to raise vital funds has been just remarkable and their commitment to see these two major projects underway is hugely admirable. We owe a huge debt of gratitude to Sean Mulryan who has been an incredible supporter of Roscommon GAA for many decades.”

The Draw will be independently observed by PWC.