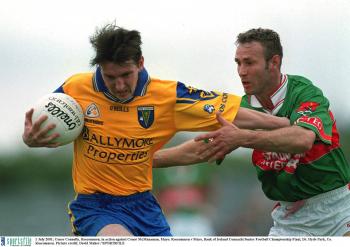 The Roscommon GAA family was saddened today when we heard the news of the passing of former County Footballer Conor Connelly. Conor was a member of the Roscommon senior football team which won the Connacht Championship in 2001 when they defeated Mayo in the Connacht Final in Dr. Hyde Park.

County Chairman Seamus Sweeney extended his own sympathy and that of Roscommon GAA to the Connelly family on the very sad news.

“I extend my sympathy and the sympathy of Roscommon GAA to his wife Claire, their three young children and to Conor’s parents Jimmy and Nora.”

“I always admired Conor as a footballer, he was a fine tenacious player who gave his all when wearing the primrose and blue. Like Rossies everywhere I really am saddened by the news”.

County Assistant Secretary and Creggs Club mate Gerry Keegan extended his sympathies to the family and said: “It's heart breaking news, Conor was such a popular figure in Creggs GAA club and was always there to lend a hand when needed even after his playing days came to an end".

"In our successful junior championship winning year in 2016,  Conor brought us up to his current Club in Ballycumber Co Offaly for a midweek training session the Wednesday night before the replay. His speech to us that night helped us clinch our first county championship in 33 years."

"Conor was a fantastic footballer and his work rate for the county jersey was unquestionable, he was also a great person off the field and was always on hand to give you good advice when you'd need it."

"The thoughts and prayers of everyone here in Creggs GAA club go out to his father and mother Jimmy and Nora, his wife Claire and three children Cara 11, Rossa 9 today, and Eoghan 6, his brothers Robert, James and Daragh and his sister Sharon."

"Conor will be sadly missed and will never be Forgotten in our club”.    Ar dheis Dé go raibh a anam ".