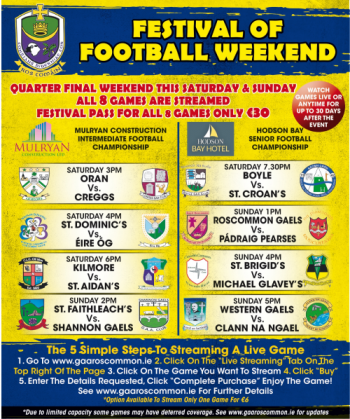 This weekend Roscommon GAA will have eight football quarterfinals over Saturday and Sunday. All eight games will be streamed live on the Roscommon GAA website.

The action starts on Saturday with Creggs and Oran at 3-00 pm followed by Éire Óg and St Dominic’s, Kilmore and St Aidan’s is the final intermediate quarter-final of Saturday’s fare and we’ll have Boyle against St Croan's in the first of the Hodson Bay Hotel’s Senior Quarter Finals.

On Sunday we again have four games all available live starting with the Intermediate Championship clash of St Faithleach’s and Shannon Gaels then the three Senior Quarter Finals featuring a replay of last years County Final between County Champions Pádraig Pearses and Roscommon Gaels at 2-00 pm, at four St Brigid’s and Michael Glavey’s the Final Game of the day is Western Gaels against Clann na nGael.

You can watch all eight games for just €30 and the games can be watched live or anytime over the next 30 days if you enjoyed a game you can watch it back as often as you like!