Gallant U20’s are defeated by Offaly. . 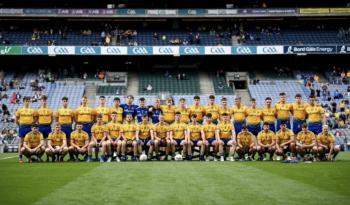 Gallant U20’s are defeated by Offaly. .

A remarkable Offaly team capped a thrilling EirGrid All-Ireland U-20 football campaign with a huge Croke Park display to secure their first title at the grade in 33 years.

Jack Bryant's 50th minute goal was the decisive score and put the Faithful County seven points clear though Roscommon battled gamely and reduced the gap to two late on.

That was as good as it got for the Connacht champions with Offaly holding on for a deserved win, their first since winning at the U-21 grade in 1988, and their vocal support hailed the performances of Man of the Match Cathal Donoghue, rising star Cormac Egan and Bryant, who finished with 1-2 overall.

Offaly played with real zip and purpose and struck some beautiful scores as they capped a strong year for the county with a landmark win.

Egan, who kicked two scores and ran hard at the Roscommon defence, played in both of the delayed 2020 Leinster minor finals this year while the county also secured promotion to Division 2 of the Allianz League and won the Christy Ring Cup.

Roscommon, who'd scored 12 goals in their four games to reach the final, netted late on through Adam McDermott but will kick themselves for failing to convert a number of great chances in the first-half.

Jack Lohan was among a group of Roscommon substitutes who came on and turned the game against Down last weekend, helping them come from behind in the semi-finals to win by six.

Lohan was retained in the first team this time and despite wearing number seven played at midfield.

But it was Offaly that started brighter, in scoring terms at least, surging 0-3 to 0-0 clear and holding the lead virtually for the whole game.

Morgan Tynan, Egan and Bryant kicked those early Offaly points and while Roscommon fought back to level terms at 0-3 apiece, it was only briefly.

Tynan put Offaly ahead at the water break with a converted 45 and three points in a row from Donoghue and Aaron Keelaghan left them sitting pretty at half-time, 0-7 to 0-5 ahead.

Roscommon were far from out of it though and while they trailed for the most part, they conjured four clear-cut goal chances in the first-half alone.

James Fitzpatrick, with five goals in the competition, drew a strong save from Offaly 'keeper Sean O'Toole, Darragh Heneghan was twice denied and Offaly corner-back Lee Pearson cleared off the line from Daire Cregg.

All of those chances amounted to a clear warning that Roscommon, with 12 goals in their four previous games, were far from out of it.

At the other end, Offaly full-forward Byrant, the conqueror of Cork with 2-4, went head to head with Roscommon full-back and captain Colin Walsh in a terrific duel. Egan, just out of the Offaly minor ranks, was picked up by Conor Lohan and had a fascinating tussle too.

Ruaidhri Fallon was Roscommon's spare man at the back due to Roscommon's decision to drop Oisin Keenan Martin, wearing number 11, into a similar role at the other end.

Two more Cregg points early in the second-half reduced Roscommon's arrears to just a single point but from there Offaly took off and it was mesmerising to watch.

Five points in a row put them in a strong position and each score seemed to be an epic, like Egan's 42nd minute point after great work by both he and Bryant to escape their markers.

Keelaghan then capitalised on a Fallon error to begin a move that ended with Donoghue sniping another score.

Keelaghan scored himself shortly after following a brilliant solo run and shot from Egan that was parried into the midfielder's path, leaving Offaly 0-13 to 0-7 up at the water break.

It looked all over when sub Keith O'Neill fed Bryant for Offaly's 50th minute goal, the full-forward bottled up by the goalkeeper before turning back onto his right foot and slamming home, to put Offaly 1-13 to 0-9 up.

Roscommon, to their credit, got that seven-point deficit down to five at one stage late on thanks mainly to McDermott's 56th minute goal but that was as close as they came.