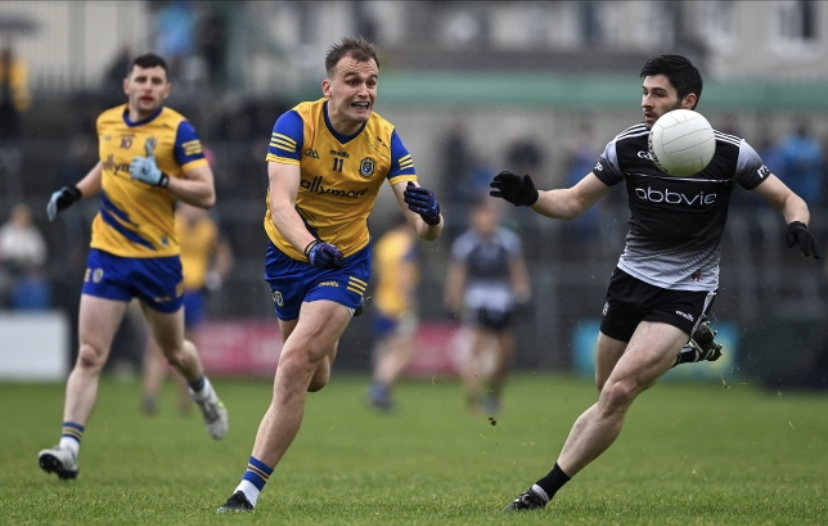 Roscommon became the first team to secure their place in any of the provincial football finals for 2022 after cruising past the challenge of a Sligo team that simply couldn’t overcome the disadvantage of losing corner back David Phillips to a straight red card with just 12 minutes gone.

There was no shortage of resolve and determination on the Sligo side, but they had a difficult afternoon in front of the posts for good measure, and simply didn’t have the firepower to keep pace with Roscommon, who ended the day with 0-18 from play, and all five substitutes getting their name on the scoresheet.

Grey skies and persistent driving rain didn’t quell the spirit of the local Sligo support, who turned out in good numbers to see if their senior charges could channel the spirit of their U-20 heroes, who made history by winning provincial honours early this month.

Zesty defence, a strong physical presence at midfield where Seán Carrabine lined out at corner forward for the throw in but dropped back to support Paul Kilcoyne and Conan Marren, and two good early points suggested that yet more heroics from the home side might be in store.

Incredible levels of accuracy was the hallmark of Roscommon’s play in their last three league games, where they shot just five wides in total, but greasy underfoot conditions meant that they were well on their way to that tally inside the first quarter of an hour. With Donie Smith, Cathal Heneghan and Cian McKeon all struggling to get into the game, it was only Conor Cox that really found his groove, kicking Roscommon’s first four points.

Cox was also involved in a huge swing moment after 12 minutes, when he hoisted a free over the bar but then was knocked to the ground by David Phillips as he ran back to his position, leading to a straight red card for the Sligo corner-back following consultation between the officials.

It took time for Roscommon to make their superiority count on the scoreboard, with Darragh Cummins’ point for Sligo making it 0-4 to 0-3 after 20 minutes.

But with Sligo’s attack badly misfiring, dropping a series of shots into Conor Lavin’s hands, it wasn’t long before the Division Two champions started to assert themselves.

Ciaráin Murtagh, Enda Smith and Eddie Nolan (a 45) all added their names to the scoresheet, before two points from Sligo just before half-time – including a wonderful strike on the run from Seán Carrabine off the left wing to leave Sligo just about hanging on at the break, 0-9 to 0-5 in arrears.

That fingernail-grip on the contest was wrenched away early in the second half when Roscommon completely took control of the tie. Enda Smith was the dominant influence on the game in the first ten minutes, adding three points, and the gap was all the way out to nine by the time Niall Murphy slipped a lateral pass across into Darragh Cummins for Sligo’s first score since the interval.

Competition for places is fierce among a highly-rated group of Roscommon attackers, and that was proven even further as the bench was emptied by both sides, and Anthony Cunningham and his selectors watched as his five replacements kicked 0-6 between them, including a brace from Niall Kilroy and a wonderful strike from Diarmuid Murtagh off the left-hand sideline.

Roscommon now advance to a Connacht Final against either Galway or Leitrim on Sunday May 29, while Sligo will hope for better fortunes in the inaugural running of the Tailteann Cup.