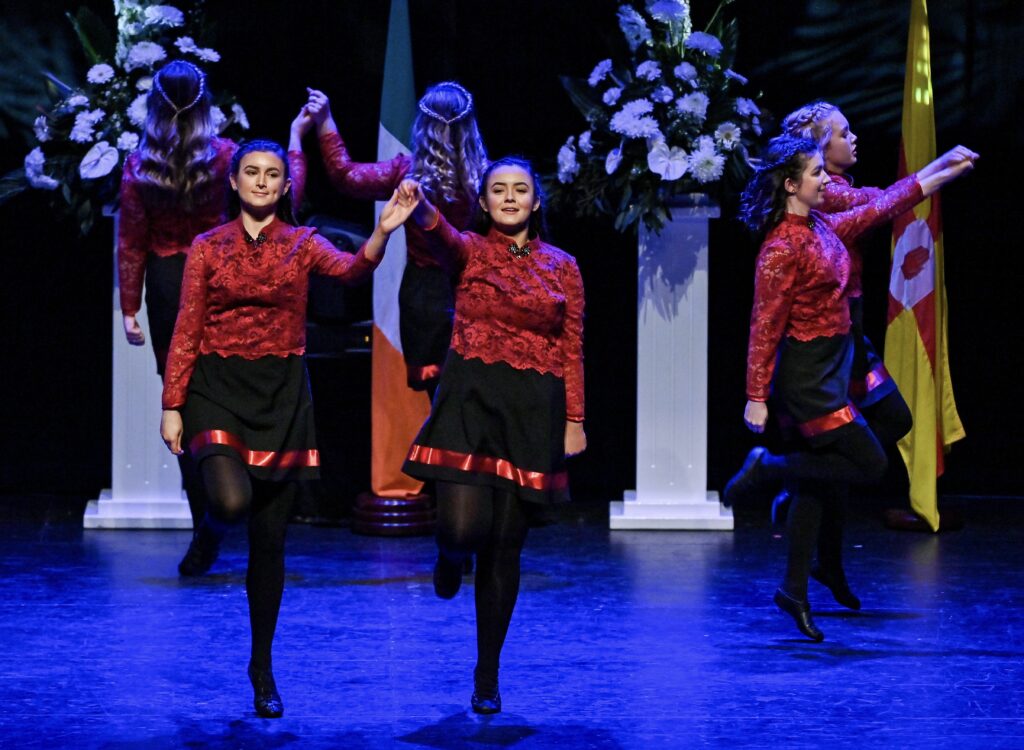 The national finals of the GAA’s prestigious Scór Sinsir competitions were on Saturday, 12th November and hosted by Connacht GAA in the Royal Theatre, Castlelbar. Clubs from across the country gathered to celebrate Irish culture and to contest for All Ireland titles in eight events. Roscommon had unrivalled representation on the day through the exploits of St. Ronan’s, St. Dominic’s and Elphin.

First up for the county were the Elphin Question Time team of Mattie Hynes, Colm Beirne, Michael and Conor Gunn. They contested against eleven other qualifying teams, three from each province, in the initial Tráth na gCeisteanna Boird (Table Quiz) round. Unfortunately, the Elphin team did not reach finish in the top three highest marked teams who progressed to the stage final. The competition was won by Monaleen of Limerick after a battle royal with Cornafean of Cavan and Edenderry of Offaly.

Elphin’s day was far from over and the team of Emily and Maria Keane, Siobhan Lee, Sylvia Regan, Clodagh McCaffrey, Emma Mulhern, Michelle and Melissa Tarpey, had the honour commencing the stage competitions when they stepped it out in the Rince Foirne (Figure Dancing). They gave a flawless performance of ‘The High Cauled Cap’ and faced opposition from Watty Grahams of Derry, Birr of Offaly and eventual winners, Newcastle from Co. Tipperary.

In an extremely competitive Novelty Act event, St. Dominic’s were the standard bearers for the home province. The reigning Connacht champions, the team of Noel and Cathy Dervan, Sylvia Kilcline, Anita Hanley and Stephen Murphy, delivered a hilarious and clever performance of their sketch, ‘Heaven Can Wait’. Against the Knockcroghery actors were fantasticteams from Cloch an Liath (Donegal), Newport (Tipperary) and Carnew Emmets of Wicklow, who went on to take the title.

The Ceol Uirlise (Instrumental Music) competition was arguably the most exciting event of the day, with four young teams turning in rousing performances. St. Ronan’s were pitted against Mullaghbawan (Armagh), Kilshannig (Cork) and Cuala (Dublin). The North Roscommon club were represented by the team of Rachel Noone, Emma Benson, Elizabeth Earley, Leanna Hennessey and Fiachra Guihen, who masterfully played ‘The Monaghan Air’ and reels ‘The Milky Way’ and ‘Tension on the Shore’. However, their efforts could not scupper Mullaghbawn from Armagh.

In the Rince Seit (Set Dancing) the Elphin team of Evan and Luke Gunn, Alex Gleeson, Rossa Brennan Kelly, Sarah and Emily Keane, Michelle Tarpey and Emma Mulhern, gave an outstanding performance of ‘The Clare Orange and Green’ to the delight of the audience. Having last won the title 21 years ago, the wonderful Elphin tradition of set dancing was proven to be in no danger of waning any time soon. Gneeveguilla(Kerry), Ballycomoyle (Westmeath) and Glenullin (Derry) provided the strongest of opposition, with the Munster champions winning the honours.

Roscommon’s representation didn’t end with the stage events as Thomas Murray of St. Dominic’s addressed the audience in his capacity as Cathaoirleach, Coiste Náisiúnta Scór and his clubmate, Alastair Beegan acted as Fear an Tí.

Coiste Scór Ros Comáin would like to commend all of our competitors for the excellent representation they gave Roscommon GAA in these national finals and thank them for their supreme efforts. Scór in Roscommon continues to feel a strong resurgence and it is hoped more clubs will ensure their members participate in this wonderful competition. Both this Scór na nÓg and Scór Sinsir All Ireland finals are available to watch on TG4’s Trad channel on Youtube. The Scór na nÓgand Scór na bPáistí competitions will commence in the new year and details will be circulated in the coming weeks.