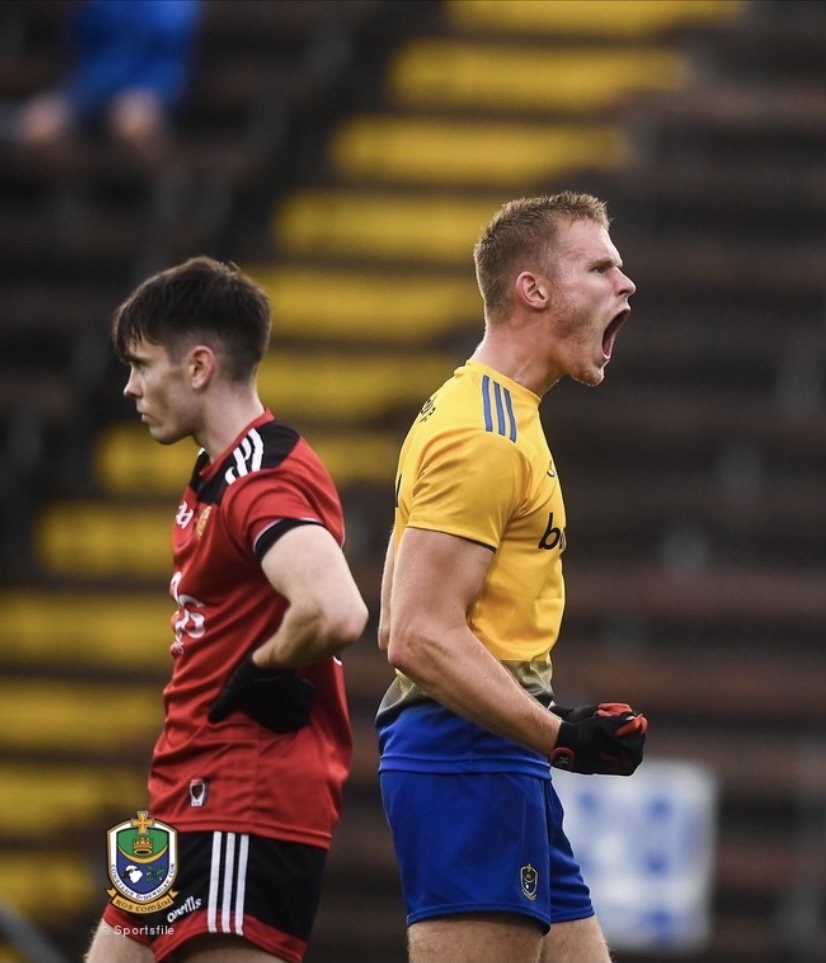 The 2021 Eirgrid U-20 football championship final will be a Shannonside derby that no-one would have predicted, as Roscommon secured their place in next Sunday’s decider alongside Offaly thanks to a six-point win over Down at Kingspan Breffni Park tonight.

A remarkable finish to the game that saw Roscommon score the last 1-5 without reply completely turned the tables on a contest where Down were marginally the better side over the first three quarters of the game. Roscommon posed a constant goal threat, even if they didn’t convert their chances at the rate that Liam Tully would have wished, but they were working with a limited supply of ball throughout, given Down’s control of the midfield battle.

Their second goal, scored deep into stoppage time, saw Adam McDermott carry the ball 40 metres and roll it into an empty net, as Down goalkeeper Charlie Smyth had joined his colleagues in trying to salvage a goal of their own to take the game to extra time. By then their challenge was hampered by a straight red card to captain Shealan Johnston, and he was joined on the sideline by midfielder Tom Close in the final minute of the eight extra allocated by referee David Murnane.

The fearless, attacking football that has been the hallmark of the Eirgrid U-20 football championship across all four provinces so far this summer was in evidence yet again right from the throw in here, as the two sides went at each other with every possession, chasing scores and turnovers with equal levels of zest on the fast, wet surface.

Down settled that little bit quicker and almost got the dream start through an Andrew Gilmore goal chance, only to be denied by a superb save from Conor Carroll. Points from Dany Magill and John McGovern followed to edge the Ulster champions into the lead, but Roscommon’s forwards looked sharp when they had possession too, and they proved it with ten minutes on the clock when a lovely dummy and run from James Fitzpatrick ended with the Oran player picking out the top corner of the net from 15 metres out, his fifth goal of this championship so far.

Roscommon held that lead up until just before half time when Johnston rattled one in for Down, but the Mourne county were always well in the game thanks to their domination of the midfield battle, where Close and Ordhán Murdock were imperious.

Ben O’Carroll opened the second half with a sublime score, but Down picked up where they left off with the next two points, and it could have been more had Danny Magill’s shot dipped an inch lower.

The introduction of a raft of Roscommon substitutes proved to be a crucial game-changer however. The introduction of Seán Trundle freed up Ruaidhrí Fallon to move to midfield where he made a big impact, David Wynne added energy and speed to Roscommon’s link up play, while Charlie Carthy chipped in with a crucial score late in the game.

Once the final quarter got underway, Roscommon were about to take over. A superb point from Patrick Gavin, drew them level, then Adam McDermott, Fitzpatrick and Carthy all hit the target, before the crazy finish led to McDermott confirming Roscommon’s win with the simplest goal he could ever hope to score.