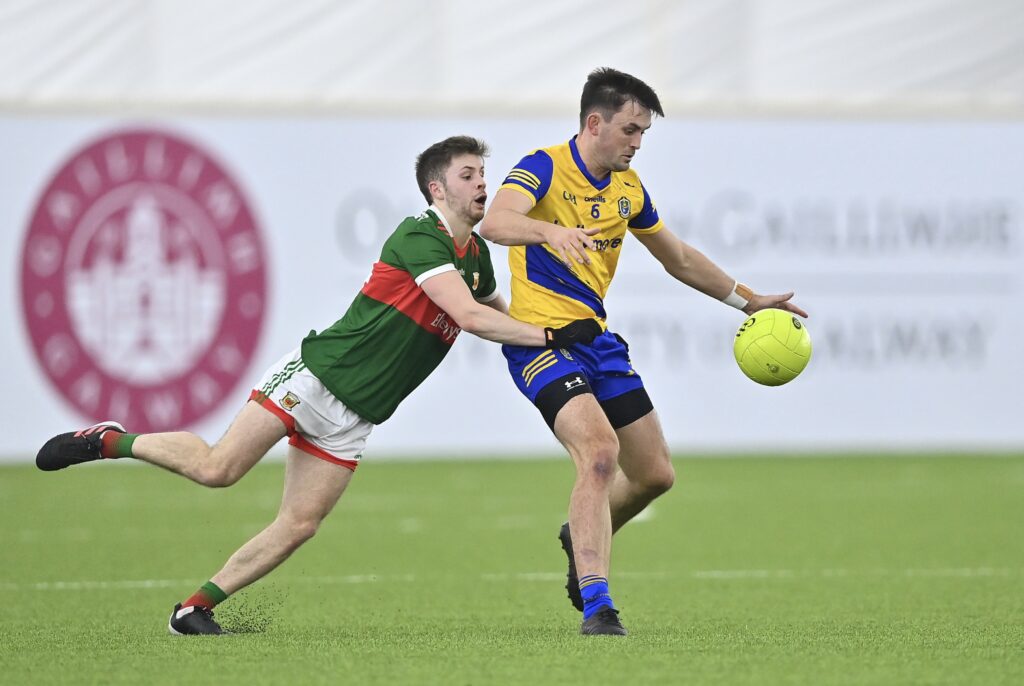 Mayo picked up the first silverware of the 2023 football season in the University of Galway Connacht GAA Air Dome tonight, after the steady hand of a couple of proven stalwarts saw them over the line in the face of a late surge from Roscommon.

After an enjoyable FBD competition where scoring had been high and the action had been frenzied in each of the three games played prior to tonight’s final, this was a much more cagey, measured affair, where neither side really hit the high notes up front.

An early point from Fionn McDonagh after just 20 seconds suggested that another free-flowing shootout was in store, but instead the next 15 minutes passed by without a score, as both sides probed patiently but struggled to open up space through packed defences.

Dead ball scores from Ryan O’Donoghue and Diarmuid O’Connor pushed the lead out to three before Roscommon finally got off the mark in the 21st minute, Niall Daly the scorer after a slick passing moved ended with Ciarán Lennon playing in the Pádraig Pearses man.

That was to be a rare moment of quality at that end of the pitch however, As the Mayo backs locked down their direct opponents, save for a glorious shot from Diarmuid Murtagh just before the break.

By that stage, Mayo had put five points on the board, while the also found the Roscommon net through Ryan O’Donoghue, though the score was ruled out by referee Michael McGirl following consultation with his umpires.

Another majestic strike from Murtagh after half-time suggested that Roscommon might be ready to get into the game, but instead Mayo settled about their work, and good straight running lines down central channels opened up chances that led to points for Conor McStay and O’Donoghue.

Keith Doyle, by some distance Roscommon’s best player in this competition, fired over a towering kick to drag the gap back to three points, but it was only when both managers went for some heavyweight reinforcement that the scoring rate started to really pick up.

Conor Cox and Donie Smith fired over two points each for the Rossies, with the second of Smith’s struck from the left-hand sideline to make it 0-10 to 0-8, but at the other end, Aidan O’Shea had set up one point for Jordan Flynn, while Stephen Coen also strode forward to split the uprights.

With two points between the sides and Mayo down to 14 men due to Rory Brickenden’s second yellow card, the stage was set for Roscommon to try and pip their western neighbours at the finish line. Instead Cillian O’Connor, introduced with 13 minutes to play, slotted two vital late scores either side of a fine kick from Conor Loftus, to clinch the win.