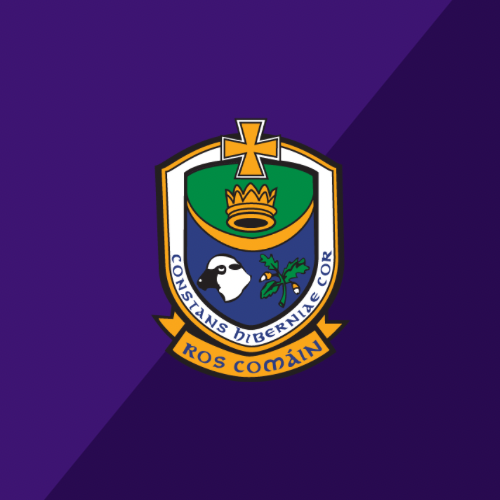 On Sunday last, Roscommon GAA and Roscommon County Council marked the 70th anniversary of Roscommon’s first All-Ireland Senior Football title win. The event, which took place in the Roscommon County Library, began by the unveiling of a commemorative Plaque by Liam Gilmartin and Brendan Lynch – members of the victorious team. They were later joined by John Joe Nerney who starred on the team of ’44.  Among the guests were representatives of all the 1943 and 44 panellists, the Roscommon Under 21 All-Ireland winning team of 1978 and Mayor of Roscommon Martin Connaughton.

The idea for the occasion grew out of a conversation last Spring between Michael Fahey, Roscommon GAA Chairperson, and GAA historian Tony Conboy. Both the timing of the event (which occurred between the anniversaries of 1943 Draw and Replay dates), and the location, in a building which was used as a training base for the victorious teams, were an important part of the project. The next step was to make contact with the guests and it was the responses to these invitations which brought home the significance of the occasion to both men. Speaking at the unveiling Mr. Fahey, said “The sense of pride that all recipients of our invitation, whether directly involved or representing deceased members of the team or officials, brought home to me the extent to which this event means to them. It also shows the depth of bond that exists between the men of that team and their families and one can clearly understand that the teams of 1943 and 1944 were really special teams.”

The Chairperson’s comments on the significance of the event were echoed by Liam Gilmartin, who also spoke at length about the life changing experience of winning an All-Ireland title. Liam played at midfield on the 1943 and 44 winning teams and spoke about what it meant to be a member of that successful group. He emphasised the spirit and the determination of the team to be the best.

Referring to the Connacht Final against Mayo in 1943 he said that “we won that game but we did not play well. The All Ireland semi-final against Louth was different. That was the best game of football I ever played in. Louth were a good team-fast, skilful and manly. We were better and we won. In the drawn final against Cavan we played poorly especially in the first half. In the second half we got back into it and managed a draw. The replay was ours. We played well and won it. After the 43 win we were determined to do back to back wins. We won Connacht easily and overcame Cavan in the semi-final. We were now facing Kerry. We were good that day. I was marking Paddy Kennedy and we had a great struggle. Our lads’ played well and we deserved to win that final.”
Describing the scenes of after the 44 final Liam said “It was great to be among your own. Your neighbours, your friends, players against whom you had played club football. Roscommon supporters were great. They followed us everywhere and gave great support to us/”
Concluding Liam thanked all concerned with the event and said he was delighted to be able to be present among team mates and families of deceased players.

Another anniversary which was marked on the day was the 35th anniversary Roscommon’s All-Ireland Under 21 win of 1978. That Final was played in Dr. Hyde Park and the team hold the unique feat of being the only Roscommon Football team to win a National title on home soil. Their victory was part of the second glorious period in the history of Roscommon GAA – when the county’s only National Football League title win, a “four-in-a-row” of Connacht Senior titles and an All-Ireland Final appearance was achieved.

Mr. Fahey concluded by thanking those who made the event possible; Tony Conboy whose “encyclopaedic knowledge of the 1940s were the main reason why we were able to organise this event”; Roscommon County Council Director of Services Kathleen Martin who allowed the commemorative plaque to be displayed in the Library Building and the County Library Services Staff under the leadership of Mary Butler who were instrumental in ensuring that everything possible was done to make this occasion and exhibition a success. He also reserved special praise for Finbar and staff at Feelystone, Boyle who designed and produced the plaque.

In this, the year of The Gathering, he acknowledged all those who travelled long distances to attend: “Your presence is proof of the bonds you have with Roscommon and I hope that you enjoy today and that you are aware of the esteem that you and the members of both teams will always be held by Roscommon people at home and abroad”.
Tony Conboy, noted GAA historian and member of the organising committee, was one of the speakers at Sunday’s event. He spoke of the background to the success that Roscommon achieved during the 1940s noting the factors that led to the historic achievement “great clubs teams such as Tarmon, St Patricks, Roscommon Town and others; success with underage teams (including the All-Ireland Minor win in 1939) and the arrival of Roscommon CBS as the dominant force in Connacht colleges laid the groundwork for the Senior teams of 1943 and 44. Then you had the leadership of the County Board with Dan O’Rourke and J.J. Fahey providing the facilities necessary to achieve success.”

Continuing, Tony outlined how the group of talented players were able to blend as a team and noted the importance that Sunday’s venue (which was used as a training base) played in the successes. The team played great, attractive football and as a result their games drew huge crowds with attendance records being shattered on a number of occasions. Paying tribute to the players present at the event he described Liam Gilmartin as “a majestic fielder”; Brendan Lynch as “a man of great strength” and John Joe Nerney as a ‘’terrier like forward” – “It was a team of all talents who were successful off the field as well as on the field. They were more a band of brothers who 70 years later still have a bond that is evident by the attendance of all you here this morning.”

Like Michael Fahey, Tony also spoke of the impact that the All-Ireland wins had on the people of the county, which could be best described with the following quote ‘’Roscommon people walked taller and felt better because of the team’s success.”

Concluding, Tony thanked Roscommon GAA for organising the event and the County Library and Roscommon County Council for their permission to erect the commemorative plaque in the Library building – a fitting place to honour this great team.

Exhibition
As well as the unveiling of the plaque, the event marked the opening of a GAA exhibition featuring photographs, programmes and other memorabilia; including the Ball used in the ’43 Final, the Sam Maguire Cup (on loan from the Croke Park Museum for the day) and the Andy Merrigan Cup – a symbol of what can be achieved by Roscommon Footballers in the modern era. Commenting on the exhibition Mr. Fahey said that he hoped it would help give “a feeling of the excitement and goodwill that existed in the county during the war years. It shows the role that the 1943 team played in making life that little bit more bearable during what were difficult times. This is a role that the GAA continues to play in Irish society and one only has to recall the wonderful summer of games in both hurling and football which raised our spirits nationally to highlights what a contribution our games can still make to Irish society”.