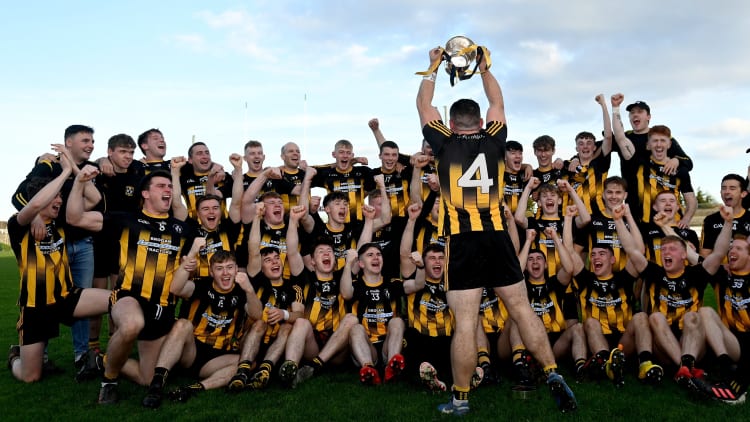 A tense and nerve-wracking hour of football bubbled up into a thrilling finale at Dr. Hyde Park this afternoon, with Tony Lavin proving the hero for Strokestown as he clipped the winning score over the bar in the fifth minute of stoppage time to secure a first senior crown in 20 years for the East Roscommon club.

Nearly 6,000 people came to the Hyde for an eagerly awaited clash between two clubs that have been starved of success, and for 20 minutes they were rewarded with a contest that was packed with intensity and physicality, but still featured some outstanding scores.

Roscommon stars Enda and Donie Smith, both deployed in much deeper roles than usual, kicked wonderful early points, but at the other end, Ciaran Regan and Keith Murphy struck excellent points off the outside of the boot to keep Strokestown in touch. The tackling was ferocious and most possessions ended in turnovers, but the play kept moving from end to end at pace, with Seán Mullooly and Colm Neary carrying ball out of the Strokestown defence very effectively.

However the momentum was sapped out of things when another Roscommon forward, Boyle’s Cian McKeon, went down with a serious knee injury, and that was followed up with Strokestown centre forward Paddy Brogan suffering a suspected broken arm, leading to nine minutes of stoppage time at the end of the first half.

Boyle led by 0-6 to 0-4 going into those nine minutes but a long range free from Niall Curley and a Cathal Lavin point tied things up at half-time.

The tension was palpable throughout the third quarter when both sides were guilty of a number of unforced errors, while opportunities to open up defences were few and far between as two sweepers were the norm on both sides of the ball.

Boyle scored the only two points in that quarter but Strokestown kept coming back at them and veteran Colin Compton came good with two excellent scores from play under pressure.

Going into added time, a foul on Cathal Compton allowed Diarmuid McGann to pop over the lead score from a free, and it looked like Strokestown might hang on when Donie Smith pushed a 40 metre effort wide of the posts on the next play. The Boyle talisman redeemed himself however when he was fouled some 55 metres out from goal in the 55th minute and duly stepped up to fire a skyscraping kick over the bar to tie the game up.

Just when everyone assumed that the full time whistle would sound, Strokestown won the next kickout and a powerful run out of defence from Mullooly set up a long ball into Diarmuid McGann, who in turned laid it off to Tony Lavin.

Lavin, who had only just come onto the field two minutes previously to make his first appearance of the season after suffering from a troublesome quad injury, held his nerve to split the posts with his weaker left foot and send his home community into delirium.